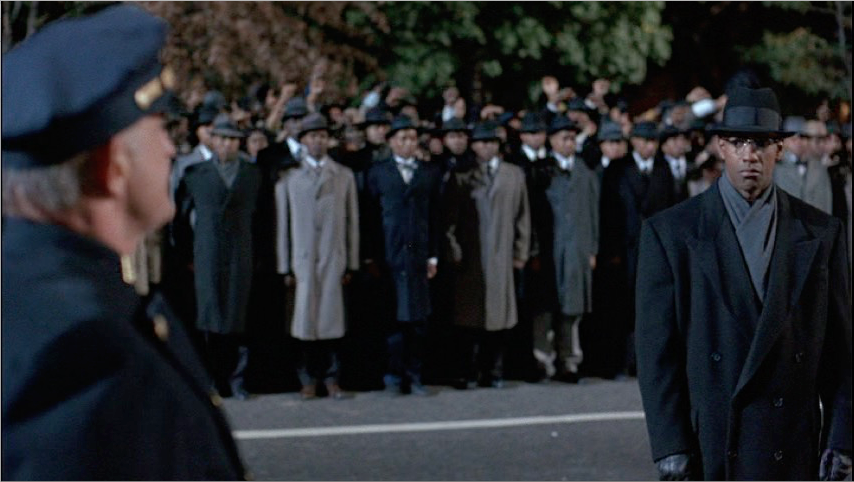 Spike Lee’s 1992 biopic Malcolm X (often just called ‘X’) is one of those movies that becomes more powerful the more you learn about the events it’s portraying.  My first impressions of how Spike Lee framed the life story of American Muslim activist Malcolm X was that this was a bit of a fanboy hagiography.  The movie was my first real introduction to to the life of Brother Malcolm and while I thought it was a good movie, I found myself shaking my head at points.

Yeah, okay.  He was a great man.  But this scene…this is kind of contrived.  It’d be a lot more plausible if Spike Lee stuck to historical facts…

…and then I did some reading and realized how much Spike Lee had toned it down when filming.

Yeah.  That was kind of embarrassing.

The specific scene I’m talking about is the one I want to use as an example for this post.  It’s the one where Malcolm leads a crowd of Nation of Islam protestors to confront the police over the wrongful beating and arrest of a man named Hinton Johnson.  It’s an impressive scene, but from the perspective of my young self, it seemed kind of over the top and blatant.  I assumed that Spike Lee had taken real events and sensationalized them for dramatic effect.  I mean, there’s a scene where a police Captain actually blurts out “That’s too much power for one man to have!”  for crying out loud!

Except that the only real change was that he compressed the timeline from a bit less than three hectic days of confrontations, protests and negotiations to one dramatic night.  That’s it.  Spike Lee applied a bit of time compression but otherwise faithfully depicted the events of Johnson’s beating and arrest, including the too-blatant-to-be-real-life exclamation from the police Captain.

So for those who haven’t seen the movie (or for whom it’s been a while) here’s the basic facts:

So at some point on the night of 26 April 1957, the NYPD were in the process of arresting a man named Reese Poe for beating a woman (never identified).  Whatever the crime, the cops were roughing up and manhandling Mr Poe and this was observed by a group of men (two of whom were from the Nation of Islam) who spoke out against it.

One of the men, a NOI member named Hinton Johnson[1], went so far as to angrily inform the Police Officers that “You’re not in Alabama!”  This was apparently crossing a line, because the police decided to arrest Mr Johnson and beat him viciously in the process.  By the time Malcolm had heard about the arrest, Hinton Johnson was lying in a jail cell with life threatening injuries for having ‘assaulted’ the police.  Presumably, the assault was of the ‘he bruised our knuckles with his face’ variety.

This was 1957, and under normal circumstances of the times, this is where the story would have ended.  Hinton  Johnson would have languished in prison for a day or two before finally dying from his injuries.  Except that on this night, Malcolm X was alerted to the news, and he rallied every Moslem he could find in Harlem that night and marched on the police station.

Having a crowd outside the precinct probably wasn’t that unusual for the police, but having one this disciplined definitely was.  James Hicks, a reporter on scene from The Amsterdam News described how clean cut the protestors looked and how they gathered in orderly ranks before the police station.  A flurry of negotiations followed.  The police were unwilling to back down and release Johnson, but Malcolm finally convinced them to allow him to visit Johnson in his cell.  Upon seeing Johnson’s injuries, Malcolm called for an ambulance and rushed him to the hospital.

With Hinton Johnson receiving medical care and (apparently) out of the hands of the police, the Moslem protestors dispersed with startling discipline.  The word was given, and hundreds of men simply strode away into the night without hesitation or argument.  It was then that NYPD Deputy Inspector McGowan was heard to remark,  with a complete lack of irony, “No one man should have that much power.[2]”

In the film, the scene comes to an end with Hinton Johnson safely delivered to the hospital.  In real life, this was only the beginning of the drama.  Later that night, the police removed Johnson from the hospital and brought him back to jail.  By this time the NOI had secured a lawyer but the police made it clear that their intent was to charge Johnson and that he would be in court the next day.

That next morning, a more formal delegation from the NOI was present at the courthouse with a lawyer ready to defend Johnson at his arraignment.  The police responded by withholding the time and courtroom Johnson was to appear in, then rushing the injured and confused man in front of a judge to answer charges without representation.

Bail was set at an exorbitant $2,500 but the NOI delegation, having finally located Johnson, were able to post it immediately and take him to the apartment of a friend.  It was there that he was examined by an NOI member who was a nurse, before being rushed again to the hospital in time to save his life (although it would be touch and go for many days to come). 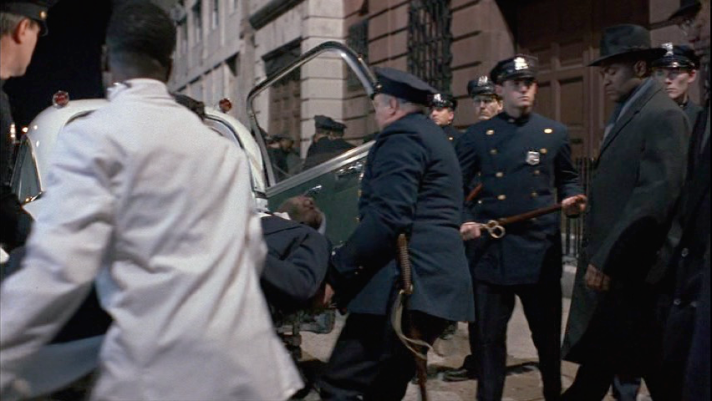 The next day, the Nation of Islam gathered in even greater numbers and marched through the streets, eventually filling the streets outside the hospital where their presence alarmed observers.  James Hicks described them as marching ‘as orderly as a battalion of Marines’ and this discipline was only underscored by their response to the arrival of some local drunks and hoodlums (some of whom were observed to be carrying guns).

In the 1950s & 60s, it was a common tactic by the police to seize upon the presence of any armed or violent individual in the crowd as an excuse to declare the entire demonstration as a riot and arrest the leaders.  Often, it was the police themselves who would plant such individuals in the crowd to provide themselves with an excuse. In this case, they would never get the chance.  No sooner had these disruptive elements arrived on the scene then the NOI marchers dispersed again, just as quickly as before.

That night several high ranking police officers, badly shaken by what they had seen, met personally with Malcolm, appealing for calm.  Malcolm responded by reiterating their complaints about the ill-treatment of Hinton Johnson, and that the NOI was prepared to die if necessary to defend their rights.

It was during this meeting that another police officer (according to a witness interviewed by Hicks) angrily shouted that they (the police) should just resolve the situation by breaking Malcolm’s skull right then and there. Without flinching, Malcolm X declared that, as a Moslem, he was prepared to die for what was right at a moment’s notice.  The police leadership opted to end the meeting instead.

As luck would have it, Hinton Johnson would live, and a riot would be averted.  Malcolm X had literally snatched him from the very jaws of death, and for their part the NYPD were relieved to have gotten off so easy.

So I wanted to go over this in detail for a couple of reasons.  Number one, it was an extraordinarily badass moment in the history of the Civil Rights Movement. A moment when injustice was confronted, the innocent were rescued, the righteous were victorious, and the bullies scuttled away in defeat.  There aren’t enough moments like this in history, so it’s important to pause and savour the ones that happened.

Number two, this is yet another thing that’s missing from Douglas Bland’s Uprising.  Malcolm X was a preacher thanks to his wit and eloquence, but he was a leader because he was willing to face the threat of violence.  He was willing to organize, he was willing to lead the marches, he was prepared to meet with the opposition and when threatened with personal violence, he accepted the risk as readily as any of his followers would.

As much as Bland may not want to admit it, while they Movement and the NPA may be an army at the time of the novel’s setting, they would have started as a civil rights organization.  As such, their first actions would have been street-level confrontations like the one we see in Spike Lee’s film.  At some point, Molly Grace would have had to step up on behalf of her people and risked her life.

Even against the police?  Especially against the police.  Bland makes it clear that her ultimate goal has always been to overthrow Canadian society in the name of some (never fully defined) pan-Canadian First Nations nationalism.  The most visible representation of the Canadian government that you’re going to see on a day to day basis is your local police force.  You’re not going to get people set to fight against the cops unless they’ve gotten into the habit of confronting authority already.  And they’re not going to have the devotion needed to put their lives on the line unless their leadership is ready to lead by example.

And this is a problem for Bland, because in order to show Molly Grace fighting for justice, he’s going to have to accurately portray  injustice.

Yeah, there’s injustice.  It’s not that hard to imagine some better written novel in which Molly Grace showing up at a Thunder Bay police precinct with a crowd of Indigenous street people behind her.  The dregs of the city, regularly busted for drunkenness and disorderly conduct, except now sober and calm.  Filled with an terrifying purpose.  This wouldn’t be hard to Bland to portray and it would go a long way towards establishing this fictional Native People’s Movement as something plausible.  Something that could conceivably come into existence and shake the nation to its core.

I get the sense that this is something Douglas Bland is afraid to confront.

***The references from The Amsterdam News are drawn from the account by Imam Benjamin Karim, a Harlem resident and later member of the NOI.  Karim appears in the film (simply as ‘Benjamin’) a bystander who joins Malcolm’s march on the police precinct.***

[1] In the film, Johnson is implied to be a completely random bystander, otherwise uninvolved in civil rights matters.  That’s not entirely accurate.  Hinton Johnson was a practicing Moslem, an NOI member and educated on civil rights matters, but it was purely happenstance that he was present for the arrest of Reese Poe.  So in that respect, he was just a random bystander.

[2] This is the quote given by the Amsterdam News.  Various sources phrase things a bit differently.  I’m using James Hicks’ version since he is the one who identified the Deputy Inspector as the speaker.