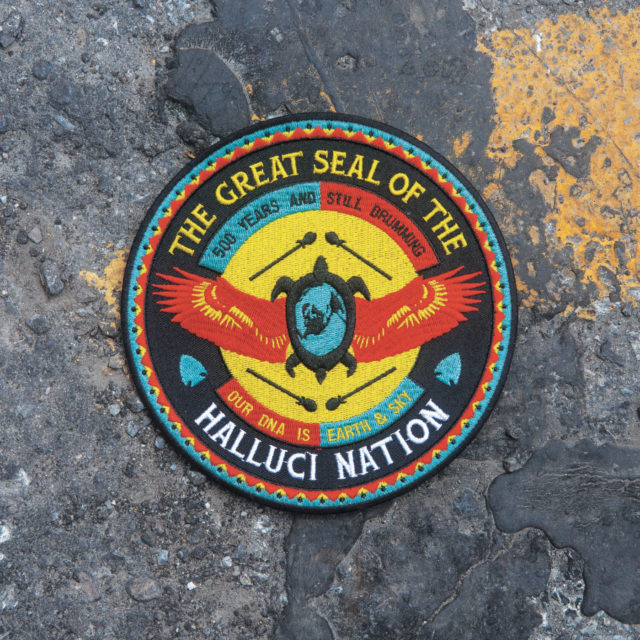 Musical Interlude – We are the Halluci Nation

***Before we begin!  In this post I discuss the belief systems of some Indigenous people in Canada and the United States.  I’m doing my best to represent things properly but, as I have said before, I’m not an expert here.  More importantly, the beliefs and philosophies I’m writing about here are held by some First Nations people.  Not all.  Maybe not even a majority.  Some.  The point here is not to conduct a detailed survey of First Nations beliefs but to present some philosophies that are diametrically opposed to the ones presented by Douglas Bland in Uprising.***

I love music, but I’m not really a music guy.  I’m not the kind of person who pours over the details of their favourite band or artists, learning all the trivia of their history and their creative process.  I got a huge library of music on my iTunes account, and a (now unused) CD collection in a box in my closet, but I don’t go wild for the tactile feel of vinyl or anything.  But I love stories, and I love history, so while I don’t actively go out looking for it, I do pick up some knowledge from time to time.  And every once in a while I can honestly say that I’ve managed to pick up on a trend and briefly been ‘with it.’

This is my way of saying that, while I’m going to be talking about First Nations’ artists/DJ collective A Tribe Called Red, I am not an expert.  I love their music, I approved of their message, but I did have to do some research over the last few days to write this post.

So over the last chapter of Uprising, we’ve managed to get some vague idea of the ideology that Bland has assigned to the Movement.  How they view themselves, how they view settler-colonialism, and the basis for which they make their claim to the land (as opposed to other First Nations groups whom they denounce as ‘white Indians’).  It’s…it’s a pretty ugly view of life.  Not only does Molly Grace’s ideology have some really vicious portrayals of ‘white’ people and Canadian society as a whole, it actually strikes me as pretty toxic towards the First Nations as well.  Reading these passages gives me a sense of some serious self-loathing at work here, and while I’d hesitate to call it wrong or impossible, it does seem to be at odds with a lot of what I’ve seen in real life.

***Just to reiterate the note I had at the start of this post, I am in no position to speak for the First Nations of Canada, or even to provide a realistic survey of their belief systems.  Nor am I saying that A Tribe Called Red speaks on behalf of Indigenous people either.  They speak for themselves and to some extent, for the artists with whom they collaborate.  Presumably their beliefs are at least acceptable to their fans, but in the end they’re one group of voices out of millions.  What I am going to say, is that they articulate a very different vision for Indigenaity and settler-colonialism, and while they may not be the last word on the subject, their beliefs are shared by more than a few First Nations activists, artists, and leaders that I have encountered over the years.***

The title of ATCR’s album ‘We are the Halluci Nation’ comes from a poem by the late John Trudell (Santee Sioux), an activist and Native American poet who (among other things) had been chairman of the American Indian Movement (AIM) from 1973-79 and participated in the occupation of Alcatraz.  In Tribe’s album, Trudell’s poetry bookends the work as a kind of spoken-word introduction and conclusion(?)[1].

So here’s the opening half, where ATCR introduces the Halluci Nation:

So far, so good.  The Halluci Nation are the people who see the sacredness of the world around them.  Who see the connection between earth, sky, nature and the people.  If you’re ‘white’ and you’ve paid any attention at all to First Nations issues, you’ve probably heard something along these lines at some point[2].  It’s interesting to note that the Halluci Nation is a group of people that defy easy characterization or definition (literally, according to the poem).  This is important and it’s an outright refutation of Bland’s Movement ideology.  They are a people tied to the land but not to a specific geographic locality, and their defining characteristic is a state of mind rather than a blood quanta.  The Halluci Nation actively rejects attempts to quantify or define what a person is.

This point gets reiterated in the poem’s second half (the second to last track on the album) which describes the forces of settler-colonialism:

The A-Lie Nation is us.  The ‘white’ people.  We are A Lie but more importantly, when those words are put together you discover that we are also the ALieNation.  We are alienated.  Separated.  While the Halluci Nation can see the spiritual in all things, we of the alienation can see only commodities to be exploited.

It’s an awesome play on words with a deeply unsettling implication.  This sense of commodification is A Lie, and its purpose is to alienate us from the real world.  To devalue everything.  Including ourselves.  Through trauma and numbness we have been cut off from the reality of the world, and it has made us into something different, and dangerous.

This is a theme that I’ve found more than a few times in Indigenous philosophy and spirituality. People themselves are seldom bad, but they can be misled, deceived and poisoned into becoming that way.  A common feature in a lot of Indigenous novels and films is to end the story with a kind of reckoning and rebalancing.  The characters need to work out some kind of new understanding that will bring wayward villain character back into society and heal the trauma that has been caused.

The closest comparison that I’ve found in western literature would be in Charles Dickens’ A Christmas Carol, in the redemption arc of the protagonist Ebenezer Scrooge.  As the story opens, we see Scrooge as a hateful, cruel man twisted by greed and utterly alienated from humanity.  It’s only after a terrifying visit by the ghost of his old partner Jacob Marley and a haunting by three spirits that he finally turns himself around, becoming kind and generous and loving both humanity and himself.

The thing is, the spirits who visit him on Christmas Eve aren’t actually there to haunt him or torment him directly, even though for him the experience is traumatic in the extreme.  All the suffering and torment inflicted upon Scrooge came from Scrooge himself.  He forged his own chain, similar to the one Jacob Marley drags around in his ghostly wanderings.  Marley and the three spirits are just there to lift the veil from his eyes and show him what he has done to himself.

In his youth Scrooge was a neglected and frightened child, who learned early on that life was hard and cruel.  Instead of taking this as an inducement to help his fellow man and surround himself with people whom he loved and who loved him, he instead sought out money and power.  He tried to protect himself by becoming rich and in the process he drove away every person that he ever loved, and that ever loved him.

In the ultimate scene of the haunting Scrooge, overcome by anguish, throws himself upon his own tombstone, which has been revealed to him by the Spirit of Christmas Yet to Come.  His agonized wail is not one of a terrified man struck down by outside forces, but by a man who realizes at last that he was his own worse enemy the whole time.

Scrooge is the ALieNation personified.

While the first half of the poem shouldn’t come as much of a surprise to you, but the second half puts it into a fascinating context.  The A Lie Nation are the bad guys in this story, but not because of anything inherent to their own nature.  They were cheated, they were lied to, they were traumatized.

The A Lie Nation are victims as well as victimizers.

This begs the question, if an ALieNation person breaks free of the Lie, can they become a member of the Halluci Nation?

ATCR members have actually already answered this question, and I think it’s what makes the concept especially cool.  The Halluci Nation is not directly chained to any particular band or nation or Treaty or tract of land.  Anyone can be a part of the Halluci Nation provided they are willing to see the world and all the people within is as interconnected and precious.  This is emphasized in the structure of the album itself, in which ATCR collaborates with dozens of different artists including many non-Indigenous ones.  Check out this video where ATCR teams up with Iraqi-Canadian rapper Narcy and hip hop artist Yasiin Bey, an American muslim probably better known by his pre-conversion name ‘Mos Def.’

This is one of the reason I’m so incensed by how Bland has dismissed a real life Governor General as a ‘black foreigner‘ and a fictional Minister of Indigenous Affairs as ‘a Sikh just off the boat.’  This is not in any way to say that racism doesn’t exist in the First Nations of Canada (or America, for that matter) but that there is a powerful counter-argument out there and Bland is actively ignoring it.

Could a toxic, racist ideology seize hold of the Indigenous people of Canada and drive them mad?  Could this madness lead them to launch an ill-conceived ethno-nationalist war against the rest of the country, striking out against the innocent and guilty alike?  Yeah, it’s possible.  Hell, smaller scale versions of these stories are a common staple in First Nations literature.  But even as this madness consumed the majority you’d expect there to still be that counter-argument to be made from the margins.

I’m going to wrap this up with one more quote from John Trudell which I found on a Facebook archive page dedicated to preserving his work.

“When I go around America and I see the bulk of the white people, they do not feel oppressed. They feel powerless. When I go amongst my own people, we do not feel powerless. We feel oppressed. We do not want to make the trade. We see the physical genocide they are attempting to inflict upon our lives and we understand the psychological genocide they have already inflicted upon their own people … that this is the trade-off they want us to make for survival, that we become subservient to them, that we no longer understand our real connection to power, our real connection to the earth.”

[1] As soon as I wrote the word ‘conclusion’ I wondered if that was the right word to use.  The entire record feels a lot like an overture, like the beginning of something even bigger  and more sublime, so maybe the whole thing is like one big introduction?  It’s probably no good for me to try and answer these questions.  Like I said, I love music but I’m not a music guy.

[2] Hell, even if you’ve never gone beyond the stereotypes you’ve probably heard something like this.  If that’s the case, then this part is real.  The rest of it may be questionable, though.

One thought on “Musical Interlude – We are the Halluci Nation”