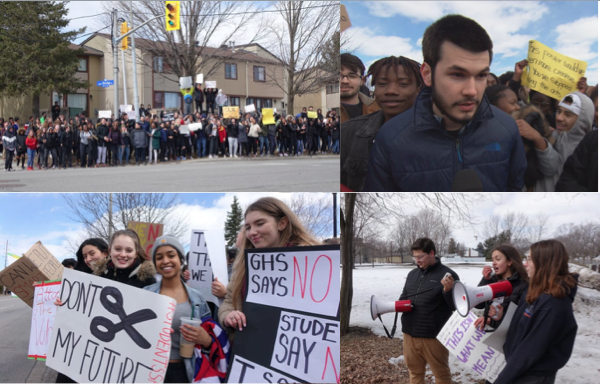 No, this isn’t the start of a joke.

…so out in the street there’s a bunch of kids.  Not young people, kids.  Mostly High School kids (14-18 years old) who are out on the streets of Ottawa today (04 April in this foul year of our Lord, 2019) to protest our current Provincial government’s proposed changes to education in Ontario.  A couple of them got signs and they look serious.  A few others got this vacant look like they’re just drifting along with the crowd, glad not to be in class.  Most of them, though, got this look that’s somewhere in between.  They’re holding their heads up, they got a bounce in their step like they can hear some kind of music that’s out of my range.

I’m not just talking about the tinnitus either.  These kids seem to have a cheerful confidence in them that I’m worried I might never feel.

A lot of them are white, but there’s a good cross-section of tan and brown in there too.  Fashion and hair styles range from conventional to ‘counter-cultural’ (or whatever term the kids have these days).  A couple of hijabs, some dyed hair.

They’re all on their way to Parliament Hill (which is just down the street from where I’m sitting and drinking in my cynical misery).  They all want to change the world, and from the way they carry themselves it looks like they believe it.

I don’t know if they can, but I envy them their certainty.

I’ve heard some people calling this part of the younger generation “Hope Punks.”  Counter cultural weirdos who embrace a kind of universalism and defy conventions in everything from the clothes they wear to the gender pronouns they use.

If you’re not sure what I’m talking about, look at Louis C.K.’s sorry attempt at a comeback. The kids he’s complaining about? Them.

I’m not going to claim to be some kind of prophet or something. For one thing, I’m too old and settled in. Prophets need to be young, angry outsiders, and all I got is anger. But I’ve been teaching the younger generation for a while now and that gives me a chance to study these weirdos up close. I’m not sure how far this latest bunch is going to carry us, but I’m actually kind of optimistic when I watch them.

I can remember when I was maybe seven or eight years old, and there was a kid at summer camp who got teased for having AIDS.  I have no idea if the kid actually had it or not.  Hell, at the time most of us didn’t even know what AIDS was (this would have been somewhere around 1984-6 and nobody knew shit).  The thing is, I can remember joining in at least once with the teasing.  I’m not sure why, exactly, but I think I was glad that someone was lower down on the food chain from me.

When I was older, I can remember comparing my clothes and hair style to those of my classmates and realizing – conventional though my identity may have been – that I didn’t belong.  On TV and in the movies, the heroes were all the same douchebags that treated me like crap in school.  This was back in the 80s and early 90s and all the role models were fucked up.  For those of you who weren’t there, it was a weird time to be young.  Go back and watch a movie from the early 80s.  That guy you see in the first couple of minutes?  The guy you’re convinced is going to be the bully or the asshole, or the rapist?  He’s actually the hero.

Later on, in High School (GHS!  Gator Power!) I remember a tiny minority of kids in my grade who didn’t care what anyone thought.  There was one guy who was an actual anarchist, but in a philosophical sense.  He was one of the most actively ethical guys I ever knew.  There was at least one guy and (maybe) two girls who were coming to grips with being gay/lesbian in a time when that was still controversial.  There was one girl (I had a crush on her for a bit) who periodically decided to do weird things like shave her head, or wear an outfit that was all fishnet.

There was one guy who was just weird, and off by a bit.  It wasn’t until a few years ago (nearly twenty years out of High School) that she finally realized that she was trans.  At the time I had no idea that Transgender was anything other than a punchline on sitcoms, but when I heard a few years back that she had changed her name and started taking hormones, the pieces snapped into place.  Of course.

This was a tiny clagg of students in a school of 1,400 and I was lucky to be around them.  Just the proximity helped me become a better person. I never had the same degree of confidence that they did (that took about a decade in the army and multiple near breakdowns to achieve) but I felt good being near them. Like being in a bubble where the stupidity couldn’t penetrate.

I watch the kids walk by on the street and I get the feeling that this tiny group from my High School has multiplied somehow, and now they’re turning out in force.  They’re walking today the way those kids walked back in 1997, except there’s ten times as many of them and the diversity’s way up.

Some of them are pretty conventional looking, but they’re walking side by side with the dyed hair and piercings kids, and seem to be leaving plenty of room for the church & mosque crowd.  They seem to know what they’re marching for, and they seem to pretty determined.

Right now they’re all still young and unfinished.  But I’m really curious to see how they’re going to turn out.  To see what kind of weird writers, artists and performers are going to come out of this generation.

Dr. Hunter S. Thompson is one of my all time favourite writers, but it’s always killed me how quickly he could turn to despair, especially later on in life.  The man saw the potential and could articulate it in a way that was beautiful to read, but when one wave crashed and broke, his spirit seemed to break with it.  Yeah, the wave may have broken, but if you’ve seen the ocean before you’ll know there’s another one coming soon after, and another after that.

Slowly but surely, those waves can erode mountains.

Change was coming, for Thompson and Dr Gonzo.  If only they’d watched and waited.  Sometimes it’s slow and incremental, like a ratchet clicking over.  Sometimes it’s huge and explosive.  But so long as children are marching then something’s going to give.

Earlier that week (serendipity, fuck yeah!) I finished reading Wab Kinew’s “The Reason You Walk.”  Technically it’s a memoire about his childhood, early years as an Anishinaabe Chief, a journalist, a teacher and a Sundancer, but more accurately it’s the story of the life of his father Tobasonakwut (also named Peter Kelly, but called Ndede-father-by Wab for most of the book).  Wab’s Ndede survived the residential schools, overcame alcohol addiction, racism and violence, to become an elder and teacher both to his family and to the people around him.

I strongly recommend this book for anyone who’s worried about the generation gap, and the future it might lead to. It’s basically a story about three generations, starting with his father, continuing on with himself, and ending with a glimpse of the next generation (including Wab’s own sons) who are already starting to carry on the tradition.

There’s a lot of powerful moments described in it, but for the sake of relevance I want to mention one scene here that serves as a good summation of how I’m feeling watching the Hope Punks walk by in the streets.  It takes place in the early days of the #IdleNoMore movement, when Wab attended a protest in Winnipeg that ended with the occupation of the Provincial Legislature:

We joined the mass of teenagers and other young people voicing their fears and frustrations, expressing their desire for unity to make things better for their people.  I remembered the idealism I felt when I first got involved with the activist scene as a teen.  And I remembered the eventual disillusionment when the personal flaws of some protest leaders got in the way of us reaching our goal.  I had seen too many so-called revolutionaries make fewer demands for social change and more for food and gas money.  There were also other warriors, men and women alike, who could be counted on to fight with one another rather than take on the challenges in our communities.  The memory made me smile, and I stood for awhile studying the sight of a new crop of avid and determined protesters.

So kids? Do your thing and don’t let none of the old fucks stop you. Some of us may have good advice though, so it’s not a bad idea to listen occasionally. They way to tell the difference is that good advice makes sense when you hear it, whereas bad advice usually requires a certain amount of “just trust me” or “you wouldn’t understand.”  They’re also looking for ways to push you to one side while they stay in charge. Those guys can go fuck themselves.

You might notice some of us older guys getting weirdly nostalgic about stuff. As long as it doesn’t turn to bitterness I’d ask you to be indulgent. It’s just us realizing that we’re not young anymore, and we probably could have done better.

***I started this blog about thirteen months ago and I wanted to write something memorable to mark the one year anniversary.  But everything I tried came across trite and insincere.  Then last week I saw the kids marching, got kind of philosophical about life, and wrote this.  So let’s call this my one year anniversary article, and let’s see if I can last another year.***

***Featured image is a collection of High School students from Colonel By, Lester B. Pearson, and Gloucester High School (yay!) participating in the 4 April walkout.  Source.***

One thought on “Hope Punks!”