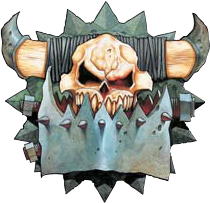 So I’ve already gone and made a couple of references to Orks (spelled with a ‘k’) which I should probably explain, given that I’m probably going to make a lot more before this deconstruction is done. It also gives me an excuse to talk about some of my favourite pulp science fiction series.  Today’s Supplemental Reading is the Warhammer 40,000 series, published by Black Library.  With a particular emphasis on Orks!

So Warhammer 40k was born out of a table top strategy game produced by Games Workshop called Warhammer.  Basically you collected, built and painted an army of tiny miniature fantasy soldiers, including humans, elves, orcs and demons (among others) and then pitted this army against the armies of other players, using dice and a complex system of rules to resolve random events in combat.  At one point they decided to transplant their game system into a science fiction setting, creating Warhammer 40,000.  Literally, a fantasy style sci-fi war-game in the fortieth millennium of humanity’s existence.

And things took off from there…and got dark.

So summarizing the world building of Warhammer 40k is not going to be easy without turning this into a 10,000 word post, mainly because this universe is growing even as we speak.  The initial ideas behind Warhammer 40k struck a cord with a number of authors, artists, and other creative personalities who began adding on to the lore and mythos of the story line.  As of this time, it includes close to a hundred novels, dozens of graphic novels, several video games and a ton of fan art and fan films.

There is a lot to cover, so I’m only just going to scratch the surface here.

In the thirtieth millennium humanity has spread across the Milky Way galaxy, colonizing millions of worlds in the name of the God Emperor of Mankind, a genetically enhanced psychic super-being who’s mind can literally reach across the galaxy like the light of a lighthouse.  In addition to vast armies of regular humans (the Imperial Guard), he is served by legions of genetically enhanced cyber-soldiers (the Space Marines) and his genetic sons (twenty super beings known as the Primarchs).

In the moment of his ascendency to godhood, the Emperor is betrayed by the Primarch Horus, the Warmaster of his armies.  Horus, already embittered and estranged from his father, had become corrupted by the forces of Chaos.  Demon-like creatures that are the anthropomorphized manifestation of the universal forces of entropy and madness.  Essentially, with the Emperor filling the role of capital-G God, Horus becomes the Lucifer figure.

Horus split the ranks of the Space Marines and waged a civil war against the Imperium.  After a titanic struggle, Horus was killed and the Emperor was mortally wounded, saved from permanent death only his ultimate god-machine creation: the Golden Throne.  He now exists in a state of living death upon the Golden Throne, unable to act directly (since he’s dead) but remaining as a psychic presence by which humans can navigate and communicate across the galaxy, allowing the Imperium to go on existing.

This leaves humanity in the fortieth millennium facing a Lovecraftian universe where they are ruled over by an unresponsive god that is nevertheless the only power  in the universe holding back the literal forces of chaos.  The Imperium has degenerated into a state that resembles a heavy metal version of the medieval Catholic church, with constant war against all enemies being the default state for most of humanity.

As for enemies, well there’s plenty of them.  In addition to the forces of Chaos (like the band Lordi except with more machine guns and chainsaws), you also have space-versions of all the classic Warhammer fantasy enemies.  The Eldar are basically space elves: Mysterious, magical and ancient.  There’s the Necrons, who are basically robot space-skeletons from the ancient times (who travel via teleporting pyramids).  The Tyranids are the Warhammer 40k version of the creatures from Riddley Scott’s Alien movies, the Tau Confederacy is basically your Japanese anime-style alien mecha warriors.

And also, you have Orcs.

Except, in Warhammer 40k they’re called Orks with a ‘k’ and under the combined contribution of literally dozens of creative minds, they have evolved into a surprisingly unique variation on the creatures first popularized by J.R.R. Tolkien.

On the most basic level they’re big green muscular brutes who either smash things, or chop things, or blast them with huge guns, or crush them with giant mecha and war engines.  They’re hideously strong, but not too smart, and while on a one-to-one basis they’re a pretty fearsome foe, to ordinary humans they don’t exactly make for a huge threat to a galaxy-wide empire like the Imperium of Man.

Except that the Orks…they get more dangerous with numbers.  The official in-universe term is WAAAGH!!! (the spelling requires all caps and at least three exclamation marks) and it’s a kind of synergy that makes a group of Orks stronger than the sum of each individual Ork in that group.

When Orks get together they instinctively unite and form a kind of social order (usually by fighting until the strongest one emerges), ruled over by the Nob.  Multiple groups will similarly combine, with the Nobs sorting out amongst themselves which one of them will be the Boss, and so on.  At a certain point though, a critical mass will be reached, at which point a Warboss will emerge, and a WAAAGH!!! is born.  The term itself is drawn from the perpetual background roar as literally millions of Orks move as one.

The effect of having so many Orks together causes an effect that manifests as a violent version of the 1,000 monkeys with 1,000 typewriters.  Orks will improvise, cooperate, innovate, and build even as they fight each other and occasionally blow themselves up.  The effect of having a Warboss gives this newly evolving mass a direction, making the WAAAGH!!! a kind of evolution/invasion/migration/colonization that almost resembles the original Gremlins movie, if the Gremlins were big enough to rip your arms off and beat you with them.

Essentially, the Ork WAAAGH!!! will launch itself from planet to planet with space ships that have no business working even as they somehow do.  Upon landing they tear their own ships apart to build guns, vehicles and mecha to fight anything in their paths (which is basically everyone), attacking with everything from guns (dakka dakka dakka!) to fighting machines (killa canz!) to just oversized meat cleavers (choppas!).  All captured material that isn’t destroyed (they will often destroy everything from force of habit) is repurposed to drive the WAAAGH!!! onwards, enabling more conquests and more destruction.  The power of the WAAAGH!!! is such that technology that shouldn’t work somehow does simply by sheer willpower.

Probably one of my favourite examples of this is the Ork innovation of Red Paint.  Now, red is an attractive colour for a racing vehicle, but there’s no logical reason for a red car to move any faster than, say, a blue one.  Except that the Orks are convinced that ‘Da red ones go fasta!’ Really convinced.  Combined this belief with the sheer power of the WAAAGH!!! and somehow their red painted vehicle actually go faster than ones of any other colour.

Although on paper they should be an absolute nightmare race, the Orks of Warhammer 40k generally get played for (dark) comedic effect.  This was cemented back in 2004 a video game version of Warhammer 40k (Dawn of War by THQ) hit upon a perfect depiction when they voiced the Orks with over-the-top British cockney accents.  “You do wot oi sey, or oi’l give you a thump!”

So in the Warhammer 40k, you have a genuine modern day sci-fi pulp series, a colossal mash-up of dozens of themes from dozens of contributors, that is gloriously over the top and ridiculous.  It’s awesome, crazy, gory and beautiful.  And the Orks are the supreme embodiment of it.

So I’ve already made a few references to Warhammer Orks a couple of times in this deconstruction, and I’ll be coming back to it again and again as thing progress.  The main reason is that, as much as the Orks are cartoonishly silly, they actually seem to be a pretty good analogue for what Douglas Bland has created in the NPA.

Except for a handful of individuals, pretty much every Indigenous person in Canada has fallen in under the banner of Molly Grace and the NPA.  There is no talk about localized issues, or personal motivations, rather a vague, mindless notion to fight against the ‘white man’ and all his works.  To this end, the Native Peoples will combine and mobilize on a level that would be the envy of a totalitarian government somehow summoning forth thousands of recruits ready to endure any privation as they wait for the moment they can strike.  A logical examination of the realities might put logistical limits on just how many people can be mobilized and supported, and how many weapons can be obtained.  No such restrictions exist in the grimdark world of Uprising.  If there’s a thousand people living on a reserve, then a thousand will answer the call.  And they’ll all be armed to the teeth and eager for a fight.

In Bland’s world the sheer thundering mass will simply manifest these capabilities independent of any real world logic.

The NPA is essentially an Ork WAAAGH!!! except it’s meant to be real life.

Am I saying that Warhammer 40k’s depiction of Orks is racist?  No.  What I am saying is that if you’re writing a novel set in the real world, and your real-life ethnic nationalist movement starts to look like a WAAAGH!!!, you might need to examine your perspective and your motivations.

***Unless otherwise cited, all images found at the Warhammer 40k fandom wiki.  Source.***