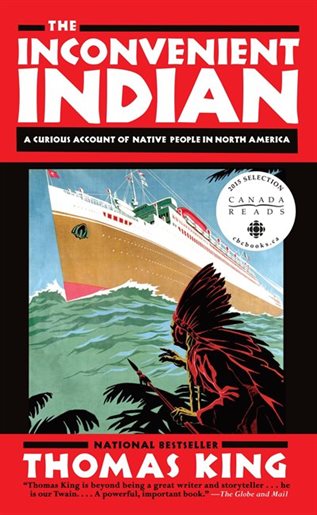 If you’re going to read one book about the First Nations of Canada and the United States, this is it.

I’m not saying this because Thomas King wrote the definitive book on the subject, or that he’s the greatest writer of our time (although he is a fantastic, award winning writer). What makes ‘The Inconvenient Indian’ such a great book is that it provides an excellent overview of dozens of different facets of First Nations issues, and that it’s one of the most readable histories I’ve encountered in a long time. It’s literally a book to read if you’re only reading one. If you’re not much of a reader, Thomas King’s style is approachable and flows beautifully. And if you’re not the kind of person to do a whole lot of research into a topic, he covers a lot of material and provides a basic introduction to a lot of stuff.

Seriously, if you’re not a reader, or if you don’t like getting into the weeds with history and politics, this is the one book you should read. You won’t be an expert afterwards, but you won’t be totally ignorant either.

Thomas King is an Indigenous (Cherokee) writer who has lived through a great deal of modern First Nations activism. He has legitimately earned the descriptor ‘public intellectual’ which he receives in the author bio in the book and the proof of that can be seen in the fact that his writing often has the feel of a friendly conversation.

The Inconvenient Indian is a work that has, in his own words, taken most of his adult life to write. On the most basic level it’s a broad survey of First Nations’ issues, interspaced with his own insights and, in many cases, his own experiences. On a deeper level, by grouping together topics that initially seem unrelated he lays out a profound commentary that surprises with its depths.

Instead of going chronologically, he groups topics by themes. By jumping back and forth in history he shows how the past, far from being long gone, is in fact in the room with us today. The early chapters trace the history of settler-native conflict and how it was portrayed in media, both at the time and today. Seamlessly he shifts to talking about the portrayal of Indigenous people in film (pointing out as he does so that there are only two actual Indigenous people with stars on the Hollywood Walk of Fame[1]) while tying it in to his own childhood reluctance to be the Indian when playing ‘Cowboys & Indians’ with his siblings.

So there’s a lot to recommend this book, but I want to focus in on one segment in particular. That has to do with King’s personal account of the time he tried to join the American Indian Movement (AIM) at their 1973 standoff at Wounded Knee.

AIM was a Native American civil right’s group that had a (somewhat unfair) reputation as militants and publicity-seekers. While the tendency was to focus on their more high profile (such as taking over Alcatraz Island, and the Wounded Knee standoff) many of their activities were a lot more ground level, protesting specific instances of injustice.

In the weeks prior to Wounded Knee, AIM leaders had joined the protest over the murder of Wesley Bad Heart Bull in a bar by a ‘white’ man Darld Schmitz. Schmitz had been provoking Bad Heart Bull that night, and was heard to utter threats before following him out of the bar to attack and stab him to death. Despite this, the authorities charged him with second degree manslaughter (for which he would be acquitted) and he would serve just a single day in jail. These same local police force would attack the resulting protests, leading to a riot that would see Sarah Bad Heart Bull (Wesley’s mother) charged and handed a five year sentence.

While these local actions may not have made much of an impression on the national conscience, to young men like Thomas King (then teaching in Salt Lake City) they were well known and understood. When the standoff began a few weeks later, King describes the mood within the Native American communities:

Support for Wounded Knee was more grassroots, more militant. Almost immediately, all around North America, demonstrations and marches were organized to bring media attention to the occupation and raise money. While the FBI and the U.S. Marshals tried to cut the village off from the outside world, determined groups and individuals, Indian and White, made air supply drops from small planes and used the rutted South Dakota landscape – the arroyos and the coulees – to run the government lines and bring supplies into the village under cover of darkness.
Sometime during the occupation, I don’t remember exactly when, there was a big rally on the steps of the Utah State Capitol in Salt Lake City in support of Wounded Knee. There were speeches, calls for action. A blanket was carried through the crowd to collect donations, and all of us tossed money and tobacco and food stamps on it. Then an older woman got up and asked the question that was asked again and again during this period of Indian history.
“Where are the warriors?”
Where are the warriors? Even now that call to arms heats my blood. It certainly did on that day in Salt Lake. When the rally ended, about a dozen men climbed into a van and three cars and headed east on highway 80. I was one of those men. As we drove into the mountains, as the passion of the moment cooled, I remember thinking that this was a mistake. I mean, I had a job. I had a wife and a baby. I was working with Indian students at the university. It wasn’t as though I wasn’t trying to do my part.
But then again, the people inside Wounded Knee probably had jobs, too. Many of them had children. I wasn’t special. I was simply…safe.
When we crossed the border into Wyoming, we were stopped by the police. A warrior might have leaped into the van in Salt Lake City, but what jumped out was just a frightened twenty-nine-year-old university administrator. I had had some experience with police, but up to that moment, I had never had a gun pointed directly at me. Somehow the cops had known that we were coming. They asked questions about the rally in Salt Lake and about Wounded Knee. We said we were just sightseeing, and the police told us to “shut the fuck up.” This comedy routine went on for most of an hour until a tow truck came along and took the van away.
After that, the police left. I must have seen them go, but I can’t remember them leaving. Suddenly, they were just gone. We waited for a while by the side of that cold road, not sure what we were supposed to do. Then, we all squeezed into the remaining cars and drove home.

The easy thing to say here is that Thomas King, a young naive activist, got a cold dose of reality and went running home with his tail between his legs. A more charitable reading would be to say that, after years of tension and hearing about real people dying, a young man suddenly had a moment and said Yeah, I’m going. I’m going now.  And was lucky to get away with his life.

They’re usually younger than twenty nine, but I see a lot of the same mix of bewildered commitment on basic training courses.

So Thomas King was twenty nine with a job, a wife and a baby. He wasn’t some stereotypical hippie (who always seem to exist in some weird limbo where they have no life, family, or job) but human being with an established life who somehow found himself in a van heading across the country to join a standoff that could have easily left him dead.

And it almost did.

This confrontation in Wyoming comes less than a decade after the ‘Freedom Summer Murders’[2] and was hot on the heels of several cases of Native American men being murdered with impunity by ‘white’ people. At the Pine Ridge Reservation where the standoff was happening, Dick Wilson’s GOONs ruled with an iron fist.  I’m making a point of saying this because it’s the kind of thing that honkies like me often have to remind ourselves about. This was the kind of confrontation that could easily leave a young Native American man dead.[3]

So the book is excellent and I highly recommend it, but for the purposes of the deconstruction I wanted to point out this scene in particular.

This is what a spontaneous rebellion looks like in real life.

Thomas King wasn’t some hardened warrior (although I’m sure if he’d made it to Wounded Knee he would have good man to have on the team), and he wasn’t filled with a mad hatred for whitey. He was a regular guy, he stepped up, and he got smashed down by some seriously sketchy law enforcement action. Luckily for him he lived to tell the tale.

Just to remind everybody again, this was a time period where a Native American person could be killed with virtual impunity. Especially by law enforcement. Notice that none of those men that King was travelling with protested the cops towing their van. I’m willing to bet money that nobody even thought about trying to get it back later on. The fact that there was a dozen of them probably helped to protect them for the simple reason that it would have been harder to deal with that many bodies.[4]

So this is an example to hold up in contrast with what we’re going to see later in Uprising. Ordinary people stepping up for a cause vs a vaguely defined Ork WAAAAGH!!! More importantly, it’s worth noting the violence that was brought to bear to shut him down. What’s left unexplained in Bland’s novel (and in a lot of right wing work) is the notion of ‘doing what’s necessary’ to suppress these scary native radicals. It’s a convenient way of avoiding what Hunter S. Thompson called ‘the grim, meat-hook realities.’

You want a society that keeps those uppity brown people in their place? Fine. It’s going to mean empowering a bunch of uniformed bullies who won’t think twice about threatening to kill random citizens before stealing their property.

Even if they never turn their guns on you, they’re still acting with your blessing.

 
[1] There are several ‘white’ actors who falsely claimed native heritage, and there are also several actors who can trace some distant lineage.  But the only two Indigenous actors were Jay Silverheels (Six Nations) who played the original Tonto on the Lone Ranger, and Will Rogers (Cherokee), who never once played an Indian in more than fifty westerns. (Graham Greene (Oneida) has a star on the Western walk of Fame, not Hollywood.) Meanwhile, there are three dogs.
[2] Sometimes referred to as the ‘Mississippi Burning Murders’ after the movie which portrayed the events. This is a bit unfortunate. Although it was in many ways landmark film, Mississippi Burning is today seen as a bit problematic as it was pretty heavy on the ‘white saviour’ angle.
[3] I’m not that surprised that they were intercepted, though. OPSEC isn’t just for the military and given the history of the FBI’s infiltration of the Civil Rights movement it’s probably safe to bet there was a narc on the phone before King’s convoy was even rolling.
[4] I shudder to think of what might have happened if the convoy had reached Pine Ridge and run afoul of Dick Wilson’s GOONs.